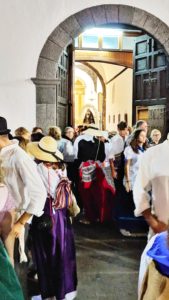 Another year the Romería de los Dolores will join Lanzarote and foreigners in the most traditional festival of the island.

Legend has it that the Virgen de los Dolores stopped the advance of Timanfaya’s lava after hearing the prayers of the inhabitants of Lanzarote.

This milestone is commemorated every September 15.

This year, the pilgrimage will be held on Saturday, September 14 with the subsequent festival on the esplanade of Mancha Blanca. The solemn Mass will be Sunday 15 and the holiday has moved to Monday 16.

From Apartamentos Tisalaya you can reach Mancha Blanca in 25 minutes by car. For security, different access to Mancha Blanca will be cut, so increase your caution on the road. A special public bus service from Arrecife is also offered.

The arrival of the television in Spain brought with it greater solcialization. The Teleclubs were born this way, in social salons and bars. At first they were mere places where people gathered to watch the Read more…

The houses of César Manrique.

On the occasion of its centenary, we would like to invite you to discover the home of this genius of Lanzarote. In Tahiche we can visit the first house. It is said that at the Read more…

August is over but not entertainment in Lanzarote. On this occasion we talked about the traveling festival Arrecife Live. Different scenarios are spread throughout the capital of Lanzarote. The performances begin on the first stage, Read more…